I know it’s been a few weeks, but I had to battle my PTSD from 2016 before being ready to start posting again. Now, I’m back and ready to take on 2017 full force in my Star Wars onesie (no pun intended). Let’s get it!

Hot Mess #1: Donald Trump for being a child

Last night, many of our favorite celebrities gathered at the 74th Golden Globe Awards, giving all of us plenty to talk about.

Out of all of the celebrities, Meryl Streep gave the most memorable speech as she accepted the honorary Cecil B. DeMille Award for her long career in Hollywood. In her speech, Streep ripped Donald Trump to shreds without ever mentioning his name, a move only a GOAT could make.

In response to Streep, Trump went straight to Twitter, calling the icon “over-rated.”

The funny part about this story is not so much Trump’s behavior, but the fact that we all were waiting for his tweet after Streep’s speech. Like how predictable can one idiot be?

As much as I want to be upset that our next president uses Twitter for temper tantrums, I just can’t continue to be that mad. At the end of the day, Americans chose to put the child in office…

Hot Mess #2: Any American who voted for Trump while on Obamacare

Look, I’ve said this before. I don’t really want this blog to turn too political, so I’m going to keep this one short and sweet.

This week, the hottest debate in Washington is whether or not to repeal the Affordable Care Act (a.k.a. Obamacare). As the reality of a potential repeal approaches, many Americans who rely on Obamacare are growing fearful. Funny enough, a large number of these Americans were the same ones to elect Trump into office (because that made sense…).

It will be interesting to see how everything plays out over the next few weeks/four years. For now, I’m just going to sit here with my popcorn and hope the world doesn’t blow up…

How the tables are turning on Obamacare

Okay, let’s rewind and take it back to last night’s Golden Globes.

On the Globes red carpet, Jenna interviewed Pharrell Williams, opening with “So you’re nominated for Hidden Fences.” Unfortunately for Jenna, there is no such thing as Hidden Fences. There are, however, two Black films currently out in theaters. One is Hidden Figures and the other is Fences.

Personally, I think the gaffe was hilarious. I mean, come on. Figures. Fences. Feelings. There are a lot of Fs at work here, so it’s completely understandable how such a mistake could happen. And, I don’t think it was necessary to crucify Jenna Bush for her error on Twitter just because she’s white (Let’s be honest. This is why this is news.)

Anyways, Jenna gave a heartfelt apology on the Today Show this morning. Poor thing. At least all the Hollywood Blacks showed her plenty of love to make her feel better.

All we need is love, love. Love is all we need.

p.s. A part of me wonders if Jenna Bush was forced to apologize since her cousin, Billy, was kicked off air for insensitive remarks last year….Hmmm…Hmmm…Either way, I like Jenna and think the apology was genuine.

Hot Mess #4: Anyone who dragged Donald Glover for his acceptance speech

One standout moment during the Golden Globes was when Donald Glover’s Atlanta won for Best TV Series, Comedy or Musical. The win was completely unexpected along with Glover’s thank yous…

Yup, at the very end of his speech, Glover chose to thank the rap group Migos for making the hit song “Bad and Boujee.” 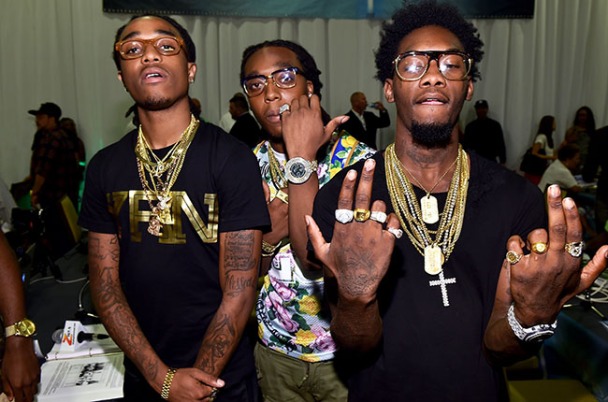 Needless to say, there were a number of uptight individuals who thought that Glover should have been “better” prepared and should have touched on the significance of his win (a.k.a. been more emotional and commented on the fact that he’s Black and winning a major award like Viola Davis).

Maybe this is an unpopular opinion, but here’s my take….

How about we all just let Donald Glover and every other artist/person live. Although I think it’s important to acknowledge the achievements of people of color in Hollywood, I also think it’s important to let people express themselves. If Donald Glover thinks it’s an appropriate moment to shout out Migos, then well, let him have his moment. Not to mention, shouting out Migos seems almost perfect given the subject matter of Atlanta.

This man walked into the Golden Globes last night, surprised everyone, looked like his old hot self and killed his 1 minute presentation of Moonlight, a movie he quietly helped to produce and that would ultimately take home Best Drama Motion Picture.

Now, that’s how you handle a terribly public divorce. Get it, Brad!

I’m sure Angie is rooting for you too deep down inside….